It has been COLD here the past few days. OK, so maybe not what some would consider to be cold, but certainly cold for what we are used to here in the Pacific Northwest. We usually see various colors of gray with rain. The way we know what season it is, is by the temperature of the rain. Cold rain means it is winter, where-as mildly chilly rain with lighter or brighter shades of gray means it is spring.

O.K., so it really isn't that bad. The corner of the world that I live in is quite colorful to tell the truth. It just rains... a lot.
We just had some snow, which is fun for us because usually when it is cold enough for snow it is the one time that we have no precipitation; but when it is precipitating all over the place it isn't cold enough for snow. So at times, several winters will go by with just very cold rain.
The kids love it when it snows, especially when they get a snow day out of the deal, which seems to happen here even if there is just a small dusting of snow. I think either the powers that be who decide to call it a snow day are really just giant kids at heart or they are chickens in the snow! Anyways, this is what we did this last snow day: 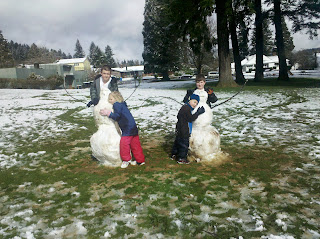 Yea, you notice that there is hardly any snow? Two reasons: 1) it didn't snow very much, just 2-3 inches and 2) they didn't make the snowmen until well into the meltdown.(To see the story of those two pathetic snowmen check-out the video at the end of this post!)
Alright, alright, so my point? I am proud to say, that I was actually out in that snow with my family. My insides having been feeling equally as cold as the temperatures outside. For no other reason than it has just been, blah. As I have recently posted, being physically down has made it extremely hard to remain upbeat and full of spunk. However, the cold is moving out from inside and I feel the blood pumping through my veins again, just as the temps plummet even further outside. This new found energy has been wonderful! Although I wasn't able to stay outside long enough to see them complete their snowmen and I wasn't able to go back to the park later to see what had become of the two gentlemen, I was out there and for that I will praise myself. I hold onto that positive advancement in the past few weeks. Looking for the good in things, remembering what you are grateful for, things like that are "what works" and sometimes just doing "what works" is the only skill we have!
Not to mention of course the opposite of hanging out indoors cuddled under a blanket while the room swirls around you, sinking further and further into oblivion is in fact.... getting outside and freezing your bum off! I enjoyed it, I really did!
MJ
(AJ was becoming delirious with trying to entertain our children after 2 weeks of me being down, so he got weirder than he usually does and more creative! He came up with this because someone had so maliciously murdered our kids' snowmen. This is what they had to say about it, mind you... the house looks like it would for anyone who has a 900ish square foot home with four kids, one adult all traipsing in with snow gear being peeled off in every direction and the maid of the house - yours truly - napping; I shrink back and cringe inside when I see how messy it is!)
at 11:30 PM

Email ThisBlogThis!Share to TwitterShare to FacebookShare to Pinterest
Labels: Distress Tolerance, opposite action