How high of a higher power?

If this were just about me and my opinion, I would give a resounding answer that there is in-fact a higher power of Divine magnitude. Yes, I mean I do believe in God. However, there are a lot of readers out there that do not and when it comes to DBT when we reference a higher power there are layers to be looked. These layers include learning a skill that whether you believe in God or not you will use the visualization of a higher power. Let me explain.

Scientist estimate that there may be approximately 70 sextillion stars in our observable universe. Of course the operative word being observable. There may be many, many, many more but as of now we are unable to account for them based on our current technology, but as we grow in that way, we also see more and more of our universe. Wow, imagine that.
So from there we shrink back a bit to our Milky-Way Galaxy to which there are only a mere 200-400 billion stars, give or a take a billion. Let's just say there are only 100 billion, which is a conservative estimate by some, to give you an idea of those kinds of numbers, think of it this way: suppose each star in our galaxy were a single page in a book. If you were to examine those pages at a rate of a page per second it would take you over 3,000 years. Obviously we don't live that long, so how fast would you have to go to get through those pages in your lifetime? In order to do it in a lifetime of 85 years, you would have to turn about 50 pages per second straight through without ever stopping. This is only if there are a 100 billion, what if there were more like 300 or 400 billion as some estimate? It get's crazy to even think of that, now understand, that is just our galaxy.
One of those billions of stars in our galaxy is our glorious sun. To give you an idea of how much space there is in space, our sun's closest neighbor star is Proxima Centauri. The distance can be visualized like this: say our sun were the size of a soccer ball being played with on a field near New York City, on this scale Proxima Centauri would be almost 4,000 miles away in Paris, France a little smaller than the size of a golf ball! Now, our sun's strength. Our sun is so powerful that one second of the sun's solar output is more energy than man has used since we were created, including the potential energy of all the thermonuclear bombs currently in storage. Which brings us to earth.
Let's now examine the size of the earth. If every person who has ever lived were living now, a liberal estimate would be 20 billion people. The land surface of the earth at present is about 57,000,000 square miles (147,600,00 sq km).  If half of that were set aside for other purposes, there would still be just a little less than an acre (c. .37 ha) per person. That is a whole lot of earth, so then your country...a rough estimate of the population in the UK is 61.7 million as of the end of 2009. The United States: 307 million; Russia: 141.8 million; the European countries: 830.4 million. That's a whole lotta people.
Then down into your city, London: 7.5 million; New York: 19.5 million; Paris: 2.1 million; Moscow: 10.5 million. Now mind you, these are just major cities. Going smaller, your neighborhood, your house...you.
Do you see how connected you are to all of this? As I sit here and feel my tush resting on the chair, my back is pressing on the chairs back. My fingers are barely brushing over a plastic keyboard making slight clicking noises. I tap my toes on the hard surface of my floor inside of a house that rests on the rock hard soil in the city of Vancouver, Washington just 10 mins. north of Portland, Oregon in the northern hemisphere on the North American Continent of Planet Earth. Which is situated as the third planet from the sun. The sun being one of some 200-400 billions stars in the Milky-Way Galaxy, which it in itself is one of some 100 - 500 billion galaxies in the observable Universe. Doesn't that just blow your mind?
Now I would say that's pretty darn high of a higher power, wouldn't you? That is the connection, taking the time to sit and really meditate on how you are connected to all of it. Doing so will help bring down the temperature a little bit when things get a little hairy. Give it a try! 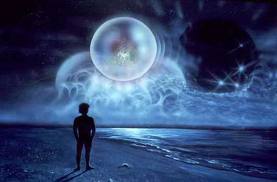